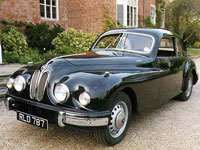 The Bristol 401 2-litre saloon was introduced in 1948 and was the second car produced by the still very new company. The main difference between this car and the earlier 400 was that the body panels were now all aluminium and were fitted to a tubular steel framework that was attached to the steel box section chassis. The car was now slightly larger than its predecessor, and this resulted in a more spacious interior that could now seat five adults comfortably. The engine was the same six-cylinder unit that was used in the 400. Some minor changes were made during its production run, which included redesigned bumpers and headlamps. The 401 was discontinued in September 1953 after the introduction of the 403 in May of the same year, for which the engine had been redeveloped to produce 100 bhp. This engine was also fitted to the last few 401 models. Outwardly the 403 is very similar in appearance to the 401 with only minor styling changes distinguishing the two cars. The last few models of the 403 had had an increase in engine power to 105 bhp with production ending in 1955.