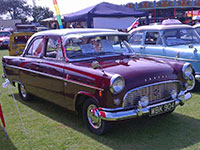 The Ford Consul Mk 2 was introduced in 1956 along with the Mk 2 version of its bigger 6 cylinder brothers the Zephyr and Zodiac. The Mk 2 Consul engine was the 4 cylinder unit from the Mk 1 but with an increase in capacity from 1508cc to 1703cc. Apart from the saloon model the Consul Mk 2 was also available as a convertible, or as an estate. These estates were in actual fact saloons that had been converted by the coachbuilding firm Abbott of Farnham. In 1957 a Consul De Luxe was introduced with improved interior trim, and in 1959 there were some styling changes which included a lower roof line. The Consul became known as the Consul 375 in 1961 to distinguish it form Fords new (but totally unrelated) Consul Classic. Ford ended production of the Mk 2 Consul in 1962.