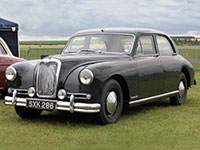 The Riley Pathfinder was introduced in 1953 as a replacement for the RMB / RMF series of cars. It had at first been tagged as the RMH but was renamed to Pathfinder before its launch. This new sleeker model had been designed by Gerald Palmer who was chief engineer of BMC from 1952 to 1955. This spacious saloon would accommodate up to 6 adults in comfort and the interior was well equipped and contained all the usual Riley refinement such as wood veneer fascia and leather seating.

The Pathfinder was the last Riley to use the big four cylinder twin cam unit that had been designed back in1926. With this engine now producing 110 bhp, it was powerful enough to give the Pathfinder lively, flexible performance and a top speed of around 100 mph. Not surprisingly the pathfinder was used widely by British police constabularies around the country as their preferred vehicle along with the Wolseley 6/90. 5152 Pathfinders had been produced by the time production ended in 1957. It was replaced by the Riley Two-Point-Six which shared the same bodywork as the Wolseley 6/90 and was powered by the same BMC C Series 6 cylinder 2.6 litre engine.