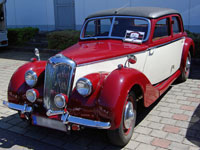 The newly designed Riley 1½ litre RMA saloon was introduced in August 1945 with the 2½ RMB saloon following in November 1946. These saloons were at once liked for their graceful and flowing lines, well appointed & comfortable interiors, brisk performance and good road manners - all of which impressed the motoring journalists & road testers of the time. The elegant bodywork was mounted on and ash frame and sat on a sturdy steel chassis. Steering was by precise rack and pinion and the front suspension was by torsion bar and wishbone. Engines used a twin camshaft arrangement that operated the inclined overhead valves by short pushrods.

From 1948 two new body styles were available on the 2½ litre models. These were the Roadster (RMC) and the Drophead Coupe (RMD) and these remained in production until 1950. Styling changes were made in 1952 which included the fitting of full width bumpers and a larger rear windscreen, as well as some improvements to the cars mechanical side such as fully hydraulic brakes. From this point the 1½ litre car was dubbed RME and the 2½ litre car RMF. In 1953 the 2½ litre ended production when it was replaced by the Pathfinder, but the 1½ litre continued to be made until March 1955.