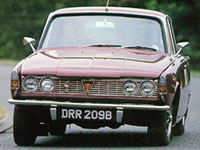 So advanced was the Rover 2000 when it was introduced in 1963 that it was to be the fist recipient of the new "Car of the Year Award" the same year. This luxury 4 door family saloon, with its well appointed interior, featured an all steel monocoque base unit onto which all the outer body panels were bolted, with the bonnet and boot lid being of aluminium. The two litre engine was a newly designed overhead camshaft unit developing 90 bhp and this drove the rear wheels via an all synchromesh four speed gearbox. Suspension was independent all round and employed a de Dion tube arrangement at the rear which enabled the car to remain quite level at high cornering speeds. Servo assisted four wheel disc brakes were also fitted, with the rear discs being mounted inboard.

In 1966 the TC or twin carburettor version was launched alongside the existing model and was equipped with a tachometer, modified cylinder head and oil cooler. At this time the option of automatic transmission became available. In 1970 the series 2 was launched and this was identifiable by a restyled black honeycombed front grille, vinyl covered rear roof pillars, stainless steel side trim, black coloured sills, modified bonnet and on the TC a new dashboard layout using circular instruments as opposed to the strip style speedometer on the earlier and SC models. The 2000 was replaced in 1973 by the 2200 which apart the increase in engine capacity, revised cylinder head and suspension was much the same car. The 2200 remained in production until 1977.