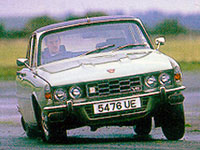 Rover introduced the V8 version of the P6 in April 1968 as the Three Thousand Five saloon, a designation it would carry until late 1970 when it became known as the 3500. This luxurious saloon basically shared the body and most of the features of the smaller engined 2000 P6 saloon that was introduced in 1963, including the de Dion rear suspension and four wheel disc brakes, however it was only available with automatic transmission to begin with. The Buick designed engine was already in use in the Rover P5B Saloon and Coupe giving those cars excellent performance, but in this lighter car it was even more impressive. In 1970 the car received changes to the interior and exterior trim in line with updates to the 2000 saloons, such as a redesigned front grille and improved instrumentation. In 1971 with the introduction of the 3500 S saloon, manual transmission arrived, with the automatic continuing in production as the 3500. The manual car benefited from improved performance, although in late 1973 all engines were detuned somewhat to meet exhaust emission legislation, and performance suffered slightly as a consequence. Also in 1973 the Rover 3500 range gained the option of being fitted with the new Dunlop Denevo run-flat safety tyres which could, even under complete deflation, keep the car stable. The Rover 3500 & 3500 S were both discontinued in March 1977. Interesting note - the car pictured here used to be the property of the P6 Rover Owners Club press and publicity officer Ian Trapp.. that's him hanging on to the wheel as he pushed it through the bend!!