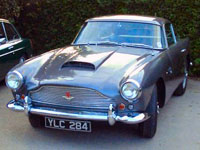 The beautiful and very exclusive Aston Martin DB4 was launched in September 1958. It went on sale at the price of £3976, or to put that into some perspective about seven times the price of a Morris Minor. The DB4 was quite different from previous Aston Martin models - the new four-seater bodywork had been styled by Touring of Milan, and was constructed around their Patented "Superleggera" steel frame and mounted to a steel platform chassis. Power was from a double overhead camshaft 3.7 litre straight six engine that produced around 240 bhp, giving this car rapid acceleration and a top speed of 140mph. Four wheel disc brakes were standard fitment and steering was for the first time on a road going Aston, by rack and pinion. The very well appointed interior featured leather seating and comprehensive instrumentation. Optional extras available at the time included overdrive, electric windows, and a limited slip differential.

A year after its launch the DB4 was joined by the DB4 GT. This car featured a shorter wheelbase and a 302bhp engine which raised the typical top speed to over 150mph, and dramatically improved acceleration - I say typical top speed because there was a choice of five different rear axle ratios on the GT. A drophead coupe version of the DB4 was introduced in 1961. Also in 1961 a higher performance DB4 was launched with a 266 bhp engine, and this was known as the DB4 Vantage, but an option for this car was the GT's 302 bhp engine, there were but a handful of these ever made though. Interestingly a few DB4's were produced featuring bodywork designed by Zagato which were intended for circuit use, and these cars were lower and shorter than the other DB4 cars, and had few interior appointments. Minor trim and styling changes were made throughout the production of the DB4 range which was discontinued in 1963 when it was replaced by the DB5 after approximately 1100 had been built.