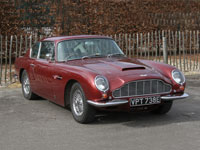 The Aston Martin DB6 was launched in 1965 to replace the DB5. The DB6 shared the same running gear as its predecessor and was also quite similar in appearance, and although it was slightly heavier than the DB5, performance of the DB6 was actually slightly better due to improved aerodynamics. The DB6 was available as both sports saloon, and from 1966, as a convertible (Volante) which featured an electrically operated hood making it the first European drophead to feature a power operated roof. The higher performance Vantage specification was still offered on both models as it had been on the DB5 cars. It is also worth noting that there were six estate car or "shooting Brake" versions of the DB6 made, with the bodywork being fabricated by coachbuilding firm Radford. In September 1969 the revised Mark II DB6 was launched and this is easily recognisable by the slightly flared wheel arches incorporated into the bodywork design to accommodate the wider 6 inch wheel rims. Power steering was fitted as standard to all Mark II cars. Production of the Volante ended in October 1970, with the Saloon ending its production just two months later in December 1970.