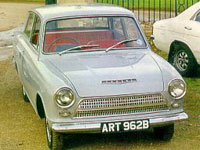 British production of Ford cars began in the 1910's at Trafford Park, Manchester, with the American designed Ford Model T, and a little later on the Model A being constructed there. Up until the early 1920's the Model T was the Britain's best selling car. All car production was moved to a new factory in Dagenham, Essex in 1932, and in the 1960's a further factory was built in Halewood, Liverpool.

The first actual British Ford model to be built was the Y Series 8 hp saloon. Two further models - the Eight & Ten were made before the Second World War, which were then after the war revived, suitably updated and renamed the Prefect and Anglia. In 1947 production of the V8 Pilot began and this used an American designed V8 engine, but production of this model was short and it was discontinued in 1951.

Further wholly British Fords were produced during the 1950's including the Consul, Zephyr and Zodiac. These of course were revised and updated and the Mk II versions arrived in 1956, the Mk III in 1962, and Mk IV in 1966, although the Consul became the Zephyr 4 with the introduction of the Mk III. Other smaller cars included the Popular, Prefect and Anglia100E with the all-new Anglia 105E, which featured an inwardly sloping rear window arriving in 1959. In the 1962 Ford's famous Cortina was introduced, and 1968/9 saw the arrival of the now legendary Escort and Capri.

The Ford Anglia 105E was launched in 1959 as a 2-door 4-seater, small family saloon. It featured a new overhead valve four cylinder over-square engine which was very eager and free revving.

The Ford Consul was launched at the 1950 Earls Court motor show and went into production in 1951. It featured an all new 1508cc overhead valve engine.

The Ford Consul Mk 2 was introduced in 1956 along with the Mk 2 version of its bigger 6 cylinder brothers the Zephyr and Zodiac. The Mk 2 Consul engine was the 4 cylinder unit from the Mk 1 but with an increase in capacity from 1508cc to 1703cc.

The famous Ford Cortina car was to become one of Fords best ever selling models. Introduced in September 1962 as the Consul Cortina, it was available as a two-door four/five seater saloon in either standard or deluxe forms.

The Mk II Cortina was introduced in September 1966 to replace the already successful Mk 1. As with the Mk 1 it was available in either two or four door form.

The Ford Zephyr was launched at he 1950 Earls Court motor show (along with its smaller brother the Ford Consul). The Zephyr went into production in January 1951, with the higher specification Zodiac following in 1953.

The Mk 2 versions of the Zephyr and Zodiac were launched in 1956 at the same time as the smaller engined Consul Mk 2. As with the Mk 1 cars the Zodiac was the luxury version of the two.

Ford introduced the Mk III Zephyr and Zodiac in 1962, but this time unlike with the Mark 1 & 2 ranges there was not a Consul model - instead the smaller engined 4 cylinder car was called the Zephyr Four.