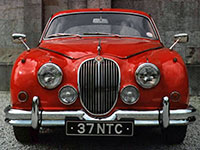 The Mk II Jaguar was launched in October 1959 to replace the 2.4 & 3.4 litre saloons, which were immediately to become known as the Mk I. The Mk II was heavily based on its predecessor but had a much lighter and more modern appearance. This was mainly due to a much larger glass area achieved by the use of deeper windows and slimmer window frames that were no longer part of the door mouldings. There were also many detail trim changes, and whilst the interior had undergone a complete redesign, it remained very luxurious with wood veneer and leather in abundance. Mechanically the rear track had been widened and improvements made to the suspension geometry. The 2.4 & 3.4 litre engines were carried forward from the Mk I but had gained slightly more power, and a third engine - the 3.8 litre, was now available. As with the larger engined version of the MK I saloon, the 3.8 litre Mk II had outstanding performance and was for a long time the fastest production saloon car in the world. The Mk II Jaguar was discontinued in 1967 with the introduction of the almost identical 240 & 340 saloon. This time though, there was not to be a 3.8 version, although this engine (along with the 3.4) was still being used in the slightly larger Jaguar S-Type, which featured independent rear suspension.