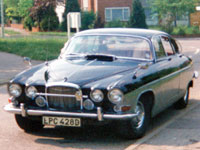 When the Jaguar Mk X was launched in October 1961, it was the very essence of Jaguars marketing slogan of the time - Grace, Space and Pace. It was the biggest car that Jaguar had ever made, and the American market was firmly in the mind of Jaguar founder and managing director Sir William Lyons during the design of this car. The Mk X Jaguar had a very imposing presence on the road and even though this car was so large (this car was the widest British car ever made) the Mk X looked incredibly sleek & powerful. Technically this car was very advanced, and certainly ahead of its time. Built using all steel monocoque construction, it featured independent front and rear suspension, servo assisted front & rear disc brakes, limited slip differential and power steering. It was powered by the 3.8 litre twin overhead camshaft "XK" engine fitted with triple 2" SU carburettors as used in the E type, and drove through either 3 speed automatic or 4 speed manual with overdrive transmission. The interior was lavishly appointed and featured leather seats of almost armchair proportions, each with their own individual armrests. The fully comprehensive instrumentation was set into a walnut veneer fascia, and indeed, walnut veneer was used extensively throughout the car on such items as screen surrounds, front & rear picnic tables, and door cappings. Due to the sophisticated suspension (which was derived from the E Type) the car had amazing roadholding and handled extraordinarily well for a car of such a vast size. Performance was very brisk, and the power was delivered effortlessly and without any drama as you may well expect from a car whose engine produced 265bhp, and an equally impressive 260lb ft of torque.

In 1964 the engine capacity was increased to 4.2 litres, giving a useful increase in mid-range torque, the brakes were improved with Jaguar replacing the Dunlop system with a Girling set-up, and a Jaguar built manual gearbox replaced the Moss gearbox fitted to the earlier cars. In 1965 a limousine version of the Mk X was made which featured a front bench seat enabling the fitting of a glass division between front and rear passenger compartments, and air conditioning became available as an optional extra on both variants. In 1966 the Mk X underwent some minor revisions and was re-badged as the 420G. Interior revisions included leathercloth safety padding being added to the leading edge of the dashboard and the interior clock being mounted centrally on the dashboard rather than being integrated in the speedometer. External differences were again minor and included a thicker central vane in the radiator grille. The Jaguar 420G remained in production until 1970 when it was made redundant by the success of Jaguar's world beating XJ6 that had been introduced late in 1968.