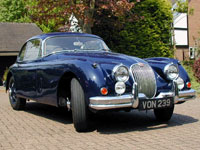 The Jaguar XK150 was introduced in May 1957 in Fixed Head Coupe and Drophead Coupe form replacing the XK140 range. The Roadster version came along in March 1958. All cars used the XK140 chassis but this time the bodywork was of a much more modern appearance and for the first time featured a one piece curved windscreen. Inside the vehicle the walnut veneer on the dashboard and door cappings had been replaced with padded leather trim. Mechanically one of the main changes to the XK150 were the Dunlop disc brakes which were used both front and rear as opposed to drums which were fitted to the XK140. The engine however was from the 140, and as before was available in standard tune, or in a higher performance version on the Special Equipment models. The Standard model had the 190 bhp of the earlier car but this time for the "SE" or S as it became known, power was up to a heady 250 bhp. This was achieved mainly by a new design of cylinder head (which became known as the straight port cylinder head) and triple two inch S.U. carburettors. Overdrive which had been optional also became standard fitment in 1958. In 1959 a 3.8 litre engine became available with 220 bhp in standard form and 265 bhp in the "S" versions. Production of all models ended in October 1960.