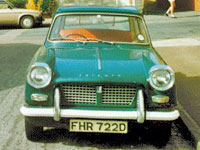 The very attractive Triumph Herald was launched in April 1959 and was to have a very successful 12 year production run. The bodywork had been designed by the Italian stylist Michelotti and the clean cut modern looks of this sporting four cylinder saloon actually hid very well the rather outdated means of construction. While most other manufacturers had by now adopted unitary construction, the Herald featured a separate chassis with bolt on bodywork. This was actually a blessing in many respects though, as repairs were much simplified by this arrangement, and the huge one piece forward hinged bonnet assembly gave completely unhindered access to the 948cc ex Standard Ten engine. Other aspects of the Herald were quite advanced, with light and precise rack and pinion steering (giving the car a remarkable 25ft turning circle) and independent rear suspension by means of a transverse leaf spring, and telescopic dampers all round - in fact this was the first mass produced British car to have all round independent suspension.

These first Heralds were available in both saloon and coupe versions, the latter being fitted with a twin carburettor engine as standard, although this was later to be an option on the saloons. A Convertible model joined the range in March 1960, and this was also fitted with a twin carburettor engine. A good feature of the convertible was that the hood could be completely raised or lowered without leaving the car. April 1961 saw the arrival of the Herald 1200 which apart from a larger engine also benefited from a wood veneer dashboard as standard along with the white rubber bumpers which had been optional on the earlier models. Also in 1961 a roomy estate version of the Herald was launched for the 1200 range, and in 1962 a Courier van was produced although this was only made for two years.

In 1964 the 948cc engined cars were discontinued as was the coupe variant, but another addition to the range was made in 1963 in the form of the Herald 12/50 saloon. This had an increase in engine power over the standard 1200, a fabric sunroof, front disc brakes, and revised front grille styling. The 12/50 was discontinued along with the 1200 convertible and estate in 1967 when the new Herald 13/60 was introduced, although the 1200 saloon remained in production until December 1970. The 13/60 which was available in saloon, convertible or estate, featured an all new frontal appearance with horizontal grille slats and had a new angular looking headlamp arrangement, whilst the interior saw a completely new dashboard layout and improved seats and trim. The 13/60 saloon was discontinued in January 1971, and the convertible and estate in April the same year. Today the Herald remains a very popular choice amongst classic car enthusiasts who are seeking a practical, characterful and economical car. Spares and club support for the Herald are both excellent.