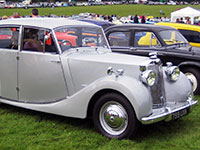 Following on from the earlier 1800 & 2000 saloons, the Triumph Renown was introduced in 1949 as a luxurious up-market saloon. The distinctive razor edge styling carried over from its predecessor, gave limousine style looks, and indeed a limousine version of the Renown was produced from October 1951 to June 1953. It was an expensive car and in 1951 the price tag was £1285 including purchase tax - nearly double the price smaller Triumph Mayflower for that year. In 1952 the Mk II version was introduced with minor refinements being made along with a 3 inch increase in wheelbase. Sales dropped off soon after this however, and production of the Renown ended late in 1954.