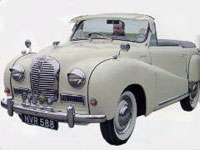 The Austin A40 Somerset was launched in 1951 and had a short production run of just two years. It was similar in appearance to the smaller A30 saloon car, but was built on a separate chassis unlike the A30 which was Austin's first unitary construction car. A convertible model known as the drop-head coupe (pictured) was also produced, but very few survive. All models had leather upholstery. The four cylinder engine was the same unit that was used in the earlier Austin Devon models, but some improvements had been made to up the power output of it. Another version of this car was the Countryman estate and this continued in production until 1957.