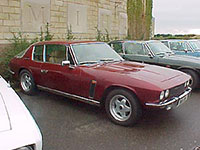 The two brothers, Alan and Dick Jensen first established a coachbuilding company in the 1920's, and the first bodywork that they produced was fitted on to an Austin Seven chassis. It was a low and sleek car that performed well. The Standard Motor Company became interested in their new design and an arrangement was made whereby Standard would supply chassis units to the brothers to have the new Jensen bodywork fitted. The resulting cars were known as the Avon Standard.

By 1936 Jensen moved into car production and their first Jensen model was powered by an American Ford 3.5 litre V8. A Jensen truck was later produced using a tubular alloy chassis. During the Second World War the company was turned over to the production of war materials and no cars were produced until the war ended.

In 1949 Jensen launched a model known as the interceptor which used a 4 litre Austin engine. In 1954 the first fibre glass bodywork car - the 541 was produced and in 1962 the CV8 arrived. The Interceptor name was of course revived in the 1960's for an all-new model that is now the car that Jensen is most well known for. Jensen later went through troubled times, but today Jensen is once again producing cutting edge sports cars.

Jensen started production of the 541 in 1954. It used fibreglass bodywork mounted on a steel chassis and was fitted with a six cylinder 4 litre Austin engine.

In October 1962 Jensen launched the 2 door 4 seater fibre glass bodied CV8 saloon. It was powered by an American Chrysler V8 engine and came with automatic transmission and all round disc brakes as standard.

The Jensen FF was launched at the 1966 Earls Court motor show at the same time as the Interceptor. Although both models were similar in appearance to each other, there were significant differences between them with a lot of the bodywork being unique to each car.

In 1966 Jensen introduced their all new Interceptor. It used an all-steel 2-door body designed by Vignale, which featured a large curved rear windscreen that opened in the style of a hatchback.